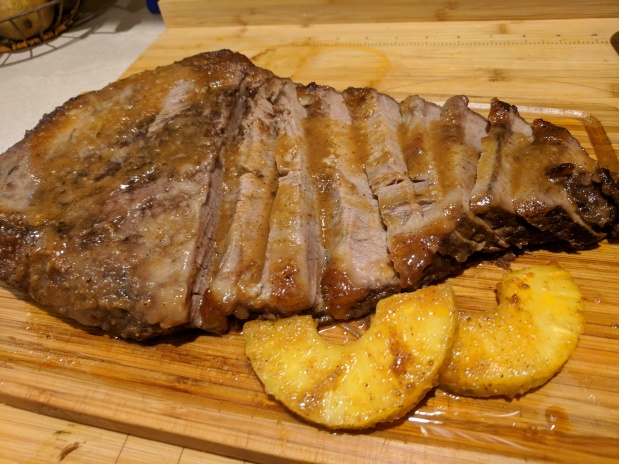 Mike called Lyn, got had a new job offer wanted some advice on the benefits. Later at home she and I discussed them and had some reservations. I can’t remember who called who but she started to explain to him our reservations of the offer. He quickly interrupted and said well that’s all settled now anyway. We took a deep breath and silently hope he had made the right decision. He had gone into his boss’s boss and explained he had a job offer yada yada yada. Oddly enough the last time this situation had come up it was with the same person because his current boss had just moved on. The guy said this is a little Déjà vu and laughed. Long story short he got a raise beating the offer, with a promise of the paperwork in progress of a promotion and a job title change. The title also comes with another raise and larger bonus possibilities. Lyn and I both breathed again and smiled he made the right choice. We knew he was appreciated there, there was even a saying at the company is it Mike Saver approved. HE mentioned that he might come over so on our trip to Wholefoods we took advantage of the online coupon saving $5 if you buy over $20 in grass fed beef. So one eye of the round and flat cut brisket later…. You call it first I call it flat whatever I think technically your right though.

For the sauce combine off ingredients, beside the meat of course, in a food processor.

Even though my meat weighed less I am believer that one always makes almost as much sauce no matter. Hey I like sauce what can I say. You never know if you like it what else you may put it on.

Place brisket in a pan just big enough to fit it and our on the marinade.

Cover tightly with a double layer of tin foil and bake for 2 hours, I cut this down by 20 minutes mostly because my timer only goes to 99 minutes and it was a smaller piece of meat. Turn and bake for another hour or until fork tender. OK made it again and took a few more pictures this time it was about 5 pounds and took around 3.5 hours total time I flipped back after one hour of original flip.

Place the meat on cutting board, I like to trim the fat cap off at this point but if you a fat lover go ahead leave it on. Transfer the sauce to a pot and simmer until it is reduced by half.

OK made it again and took a few more pictures this time it was about 5 pounds and took around 3.5 hours total time I flipped back after one hour of original flip.

Serve or do what I did.

My mom used to make a candied brisket and treated it much like a glazed ham (kosher of course) she would place the brisket under broiler with pineapple slices and baste with the sauce to create a glaze I think she used red cherries but with the dye and all. So I did this since I had some pineapple slices left over from the Napa cabbage coleslaw. That brisket is a whole other recipe can’t remember if I posted to the site or not. If you browse you’ll see we love brisket.

OK to answer those who always ponder on this.

A braise is fork tender when you can insert a sharp utensil into the center of the cut and encounter very little or no resistance. Your fork or knife should be able to slip in like butter, and you should be able to easily tear a piece of the meat away from the rest of the braise.

We went to the mountains to find our Zen and get medical, metaphysical and general outlook on health enlightening, Canyon ranch highly recommended. The fist night we went to dinner the service was great the food excellent and the servings were perfect size, maybe small to some but  a good reminder of what it really should be. Concepts like changing back our  focus from what for dinner well lets see steak maybe chicken and some vegetables to lets make some roasted veggies and maybe steaks for the side. Did that for a long time can’t remember how we slipped away. Anyway I took a lot of hands on cooking classes and they always had a lunch and learn demo where you sit, listen learn make a few new friends as you eat some great food. I sharpened my knife skills, diced, minced and nibbled oh sorry chef’s treats, and thoroughly enjoyed my self. Maggie the Demo chef was great, open and warm after the week she got to know me and we compared notes mostly me stealing some of her ideas.

Anyway home and trying out a few things.

Combine all  vegetables and in large bowl and toss. 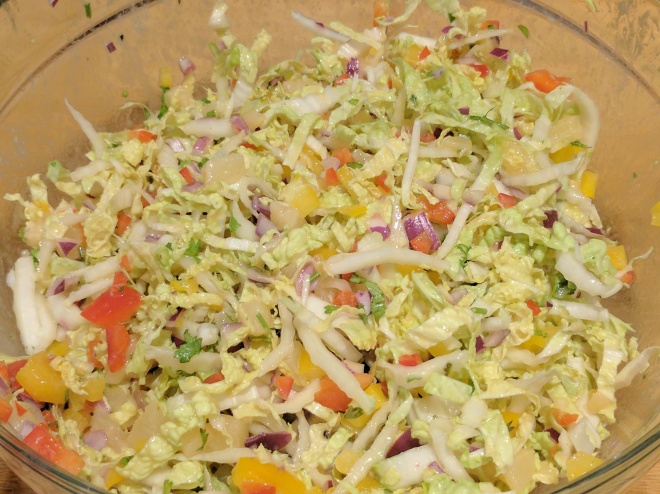 I believe this will be better later in day or tomorrow, my general rule, taught by Mom .