I had a bowl full of cherry tomatoes, a yellow pepper and a pound of 90% burger from wholefoods and even though Lyn is not crazy about this dish I had a craving. So in this case the heck with her its all about me this time. I grew up calling a similar dish American Chop Suey so I based it a lot on my recipe but i’ve seen it been called Goulash so since this was different I ‘ll call it such. 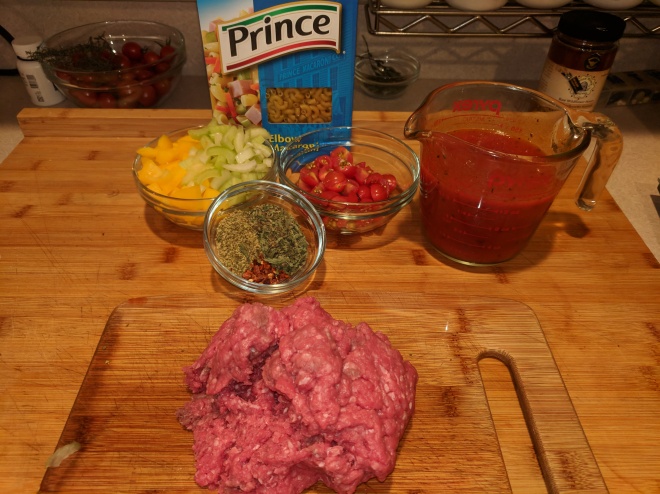 I tired something I read on browning the burger and I have to say I think it worked. I flatten the burger out and place on the preheated pan on high with a little oil and browned on that side for a few minutes over medium, turning down the heat to medium as soon as it hit the hot pan. 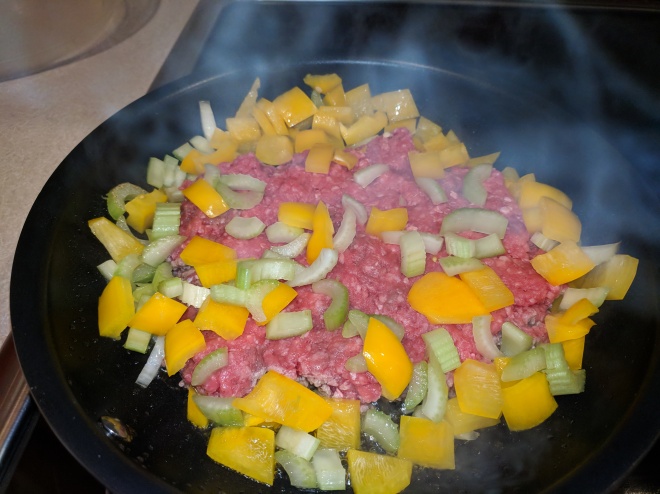 Flipped it and then started to break up into smaller chunks. this did as I read kept the meat moister. I used to immediately start to chop up the meat. I had already added the pepper and celery and by the time the meat had browned they were limp but still had a little bite to them. Mine was 90% lean so there was very little fat render if you used 80% or lower then drain the fat out.

I then added the spices , tomatoes and sauce  mixing well and brought to simmer then stirred occasionally. 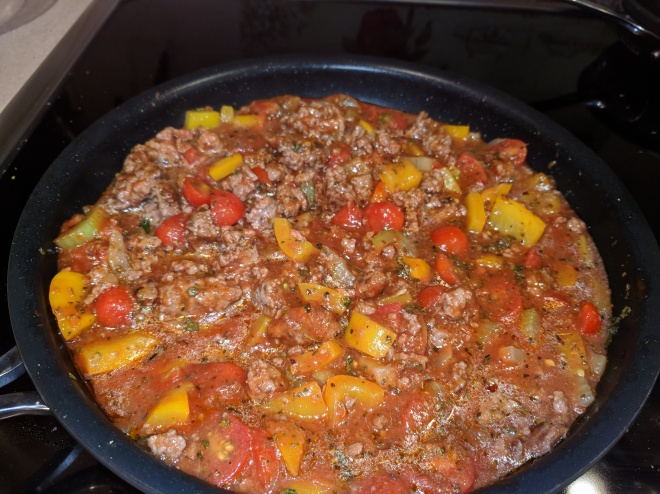 In the meantime I had a plan I was going to freeze a lot of the meat mixture for a quick easy future bachelor meal so instead of cooking the one pound of elbow pasta I only cooked up 1 cup.  and I only cook for 5 minutes.

When the pasta was done and bowled I scooped the meat mixture on top, mix to coat well it up and then being raised by my dad squirted some ketchup on it.  I know I know I know.

It was quick and easy but did create a bunch of pots and pans but well with. Lyn shook her head and had a salad for lunch.

Ok Tuesday night and Lyn had taken out a tenderloin out. So I cut up a baked potatoe to make french fries, Lyn was in charge of the brocollirab. Pan seared about 6 minutes in the cast iron pan flipped it and threw it in the oven with the fires for another 5 minutes let sit on cutting board while the fries finished. Everything was done about the same time, Lyn smiled she knows how I love it when everything is done at the same time. It was so tender you could cut 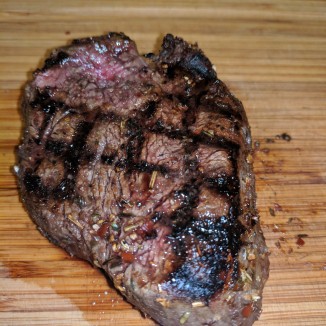 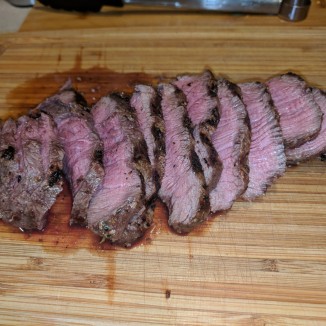 Lyn and I took advantage of the lower humidity and want for a walk, on the way back just before our house we discovered some super sweet wild blackberries and no posin ivy I hope.