My nice Roman Catholic wife decided that she did not want a turkey this year for Xmas dinner and that a brisket would be nice. I found a recipe with red wine and that was the plan until the trip to Whole foods could not yield a 6 pound Brisket. I was taken by surprise and kind of stood there with a blank spare, Lyn was down another isle all the pressure was on my shoulders,  the plan in my head thrown off kilter. The butcher said here just cook these together stacking 2 three pounders on top of each other. I mumble sure what else can I do. On the way to break the news to Lyn it came to me our first annual Brisketathon. Two different brisket styles the ultimate taste treat. Lyn found this recipe from an old email from Missi said it was the best meat she ever had at this party, she got out the recipe it had red wine. Keep in mind she was then and still is basically a vegetarian, or Raw food and what I fondly call her witches brews. Flax seed in ….. how awful I used to say – used to the key phrase here I have now issue with Flax seed now. I had found another red wine version on the Jewish Journal.  Mike was excited about the menu and was looking forward to Xmas dinner.

Remember I have found the secret to a good brisket has always been make a head, slice across grain, refrigerate and reheat

Made by Lyn for the Brisketathon  2014

Position rack in bottom third of oven and preheat to 300°F. Heat oil in heavy large ovenproof pot over medium-high heat. Sprinkle brisket all over with salt and pepper. Add brisket to pot and sauté until brown, about 5 minutes per side. Transfer to plate, fat side up; spread with reserved 1 tablespoon apricot mixture. Add onions to same pot. Sauté over medium-high heat 5 minutes. Add carrots, ginger, coriander, cayenne pepper, remaining 6 garlic cloves and 2 1/2 teaspoons cumin; sauté 3 minutes. Add wine and boil until reduced almost to glaze, stirring up any browned bits, about 5 minutes. Return brisket to pot. Add stock and bring to simmer. Spoon some of vegetable mixture over brisket.

Spoon off any solid fat from top of gravy; discard fat. Scrape gravy off brisket into pot. Place brisket on work surface. Slice brisket thinly across grain. Bring gr avy in pot to boil over medium-high heat. Boil to thicken slightly, if desired. Season gravy with salt and pepper. Arrange sliced brisket in large ovenproof dish. Spoon gravy over. Cover with foil. (Can be made 2 days ahead; refrigerate.)

Rewarm covered brisket in 350°F oven about 30 minutes (or 40 minutes if chilled). Sprinkle with cilantro and serve.

I don’t compliment myself too easily. In fact I have a complex about not being good enough. I am terrified that everything I do will suck and bring embarrassment to my family and the entire Jewish people at large. A neurotic Jew- that is so cliche, which only makes me feel more pathetic. I have been to therapy, I have seen healers, done yoga, tried alcoholism and acupuncture. If it wasn’t for a small dose of zoloft I wouldn’t even have the guts be writing this. But let me be clear: I don’t need the zoloft to tell you that I know how to make a friggin’ brisket.

My brisket is made with Jewish heart and Italian flavors. I cook it much in the same way a Northern Italian might braise a different cut of beef (in wine, tomatoes, and aromatics: meaning rosemary, thyme, bay leaf, etc.) to create a dish that tastes like Tuscany but feels like Shabbat.

While I am aware that there is such a thing as BBQ Texan Brisket, I do not acknowledge that as brisket. Until the state of Texas chooses to recognize reproductive rights, gay marriage and the replacement of oil with renewable energy, I will not recognize their brisket. Until then, no stars for the lone star.

Please let it be known that even though I keep throwing out the Jewish card on this one, my brisket is not only meant for the chosen people. Anyone who eats it feels chosen. You can line a hundred Jews up to tell me that my brisket is amazing but it won’t carry the weight of one Italian who gives me the same compliment.  Of course, they call it spezzatino…my Italian friends still remember and still talk about my spezzatino.  (FYI, spezzatino is usually made with cubed beef from a different cut.)

One day a few years ago, I made a brisket to combat a wave of depression that was trying to creep its way in, quite a lot of food and time when no one but misery is coming over to eat. If you bake it, they will come. Just as I was taking it out of the oven,  in walked a group of my Italian friends (they called about 2 minutes beforehand to notify-  very typical) in order to pick up something they needed. When they smelled and saw an 8 pound spezzatino in my kitchen they almost went through the roof. They called other friends, had them bring wine and before I knew it a dinner party was well on its way with a meal that no one has ever forgotten. And as for that wave of depression, postponed.

Brisket is actually incredibly easy to make and pretty hard to mess up. You can add a little too much of this or a little too little of that but as long as you have a few basics (which I will of course share with you) all the flavors will meld perfectly with time in the oven to bring you a delicious, juicy brisket. The problem with many briskets, however, is that they are either too sweet, too dry and/or too fatty. Sweet briskets can be tasty but I don’t want dessert for dinner and I don’t want my main course to further contribute to my hangover. (Note: It’s the sugars that makes you feel icky in the morning and quite frankly I would rather have wine and dessert than beef that topples over the glycemic index.) Furthermore, briskets don’t need to be dry in order not to be fatty. The trick to making a juicy, tender brisket is four-fold: 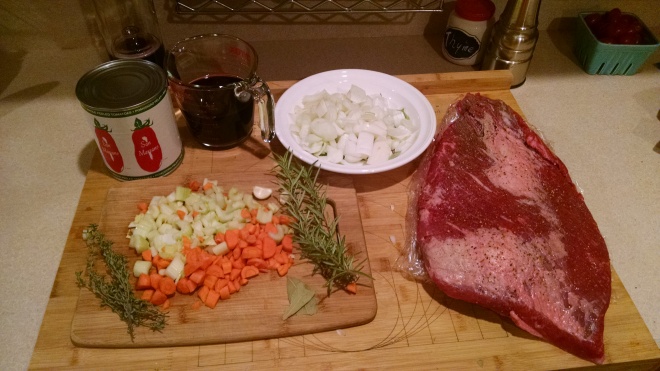 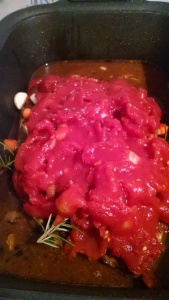 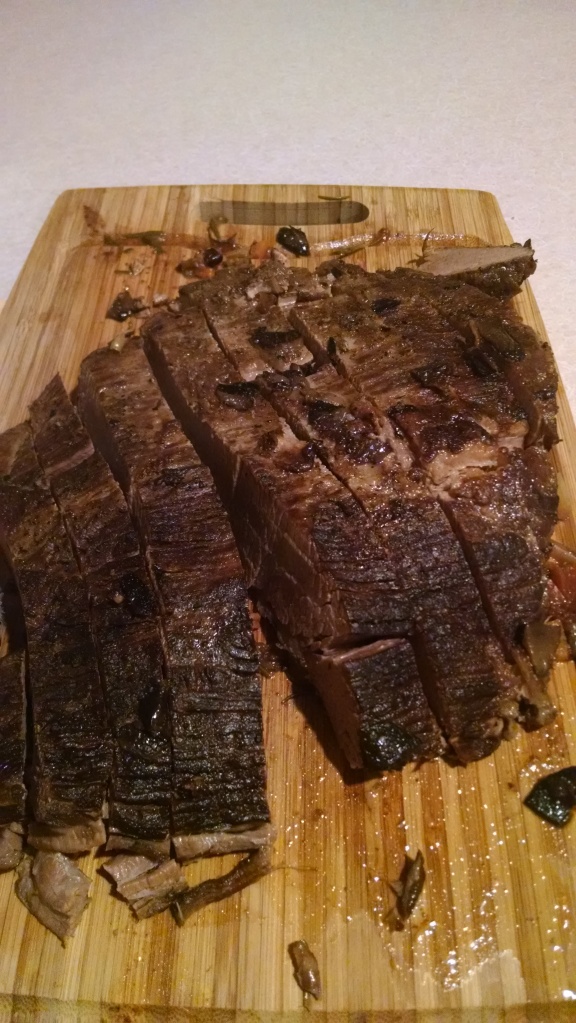 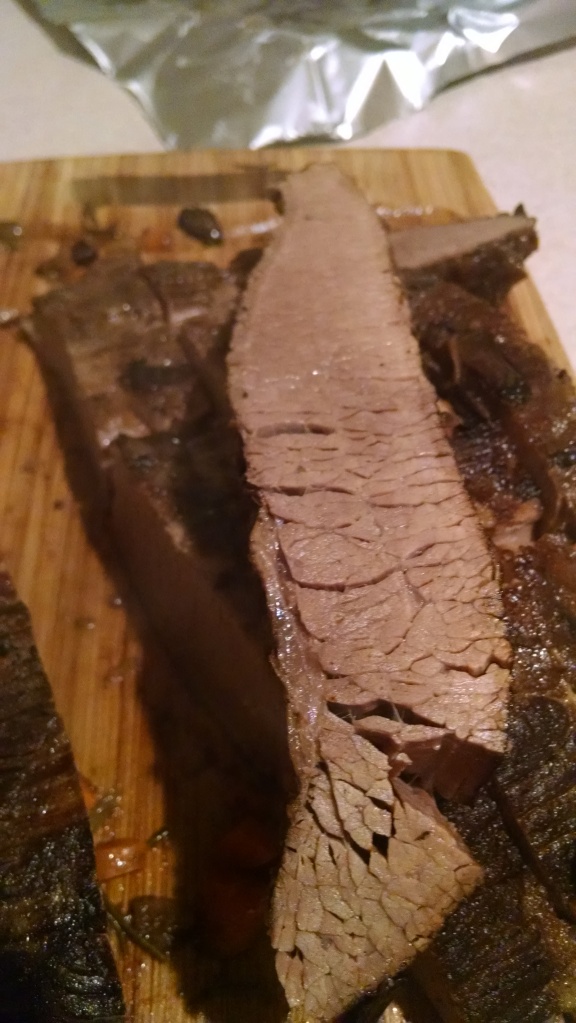