While I was working for 20th Century Fox in New Orleans the movie theater in Natchitoches LA was one that I dealt with. I quickly fell in love with this town and my wife and I would travel there many times during the year. It was here that we discovered among other things wood duck decoys and meat pies. In the cook book “Cane River Cuisine” there are two recipes for the delicious pies not sure which ones I ate on my many trips to Natchitoches, LA one from Mrs. Charles E. Cloutier and the other Mrs. L.J. Melder.

From early Native American Indian inhabitants to the French explorers and priests to the American arrival in the early-1800s, Natchitoches has lived through hundreds of years. We came into the United States in 1812 and to this day the Indian, French, Creole, African American and Anglo cultures mix their cultures, traditions, and talents, and yet they remain distinct.

Meat Filling: Combine first 6 ingredients in a large Dutch oven. Cook over medium heat, stirring often until the meat loses its red color. Do not overcook the meat. Sift the flour over meat mixture, stirring often, until well combine with meat. Remove from heat and cool to room temperature. Place meat in a large colander to drain off excess grease and juice.

Crust: Sift flour and cut shortening into flour. Add beaten egg and milk. Form dough into a ball. Roll about 1/3 of the dough at a time on a lightly floured board or pastry cloth. Cut dough into 5 to 51/2 inch circles. I use the top of an old coffee pot, which is exactly the right size (Steve says, that is a percolator 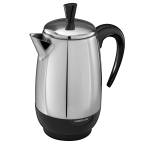 for you younger ones out there. She must have a larger 16- 20 cups one) I find it easier to cut out all the circles for the pies and place them on a cookie sheet, separated by wax paper.

To Assemble: place a heaping tablespoon of the filling on one side of the pastry round. Dampen the edge of the pie containing meat with fingertips, fold top over meat and crimp with fork dipped in water. Prick with fork twice on top.

To Fry: Fry in deep fat fryer at 350 degrees until golden brown. These meat pies freeze beautifully uncooked if enclosed in plastic sandwich bags. When frying frozen meat pies, do not thaw before frying. Cocktail meat pies may be made the same way, using biscuit cutter and 1 teaspoon of meat filling. Makes 26 to 28 5 to 5 ½ inch pies.

Melt shortening in heavy pot.  Add meat. Cook until pink is gone.  Add vegetables and season to taste. (Season well, as meat will lose seasoning during frying.) When meat is completely done and vegetables glazed, remove from heat and drain excess liquid.  Stir in 1 tablespoon flour.

Sift dry ingredients together.  Cut in shortening.  Beat egg and add to milk. Work gradually into dry ingredients until proper consistency to roll. Break into small pieces and roll very thin. Cut into rounds using a saucer as a guide.

To assemble: Place a large tablespoon of prepared meat along edge and halfway in the center of round dough. Fold the other half over, making edges meet and seal with water. Form edges with fork.  Drop in deep fat and cook until golden brown.  Drain and serve hot. Makes approximately 18. 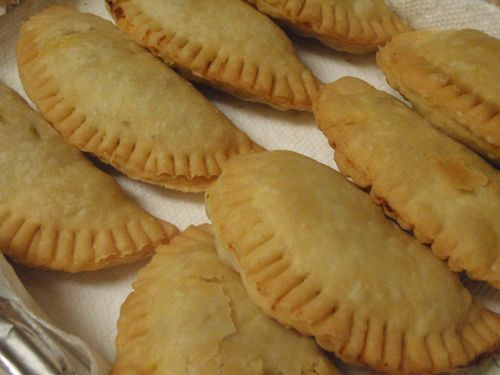 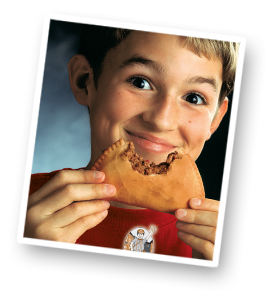 Most preperation pictures from  chadzilla