Sometimes it was so hard to get your kid to eat something you would try anything, airplane, train in the station whatever well Lyn and I were into an Asian phase and mike was having no part of it. He was still into the stage that nothing could touch on the plate yet he would gobble down shepherd’s pie Anyway one of us told him it was chicken made with jelly beans and he bought it, notice how I protected whoever said this. It is funny because they are not sweet in any form whatsoever. These have been a hit whenever I have made them jellybean or not.This came from a book that I bought maybe 25-30+ years ago and stuck the recipe has change a little but not much. Try them I think you will like.

Wash the chicken and dry well with paper towels. In large shallow dish (something you can use to marinade in) mix soy sauce, oil and wine. Using a broad flat knife crush the garlic to a pulp with the salt and add to the soy mixture with the ginger and five spice. Mix well. Add the chicken and turn to coat all sides. Cover and marinade for at least an hour. Again as mentioned in other recipes, I like to marinade overnight or at least 6 hours fix in the Am ready for dinner.

Remove chicken from marinade put in single layer in roasting pan that has tin foil covering bottom and sides( help with clean up). I find that laying tip to bottom tip to bottom allows you to fit more in a pan, they nestle together. Spoon about 2 Tbsp. of the marinade over the chicken. Roast about 45-50 minutes turning once half way until the chicken is brown and crisp. Basting every 20 minutes or so with the marinade.  Finish off quickly under the broiler to get that extra crispy finish but watch them so they do not burn.

Variation use whole drumsticks need a little longer to cook 50-55 or even thighs take about an hour. I tried but did not like it as much using a whole chicken rub the marinade over the chicken spoons some inside the cavity. Wrapped in plastic wrap for about 1-2 hours then roasted as above on a rack. The flavor did not carry as well as the wings so wings it was. 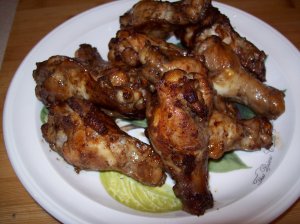 Had to have some for the game, just a taste! 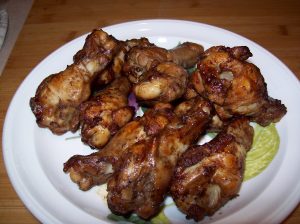 Oh don’t tell Mike about this!

Interesting fact crushing the garlic to a pulp in the salt mellows the intensity of the flavor or at least I read that the other day. Does one believe everything one reads?