Another Lyn free meal that she found on Pinterest. We love spaghetti squash there is just so much you can do with it. It is wicked easy to prepare then you just get inventive. This recipe is adapted from Dr. Mark Hyman site. Just a few additions and some substitutions and there we had it, one of my favorite meals but no noodles

In this classic Thai dish you can maximize your nutrition by trading carbohydrate-rich rice noodles for low-glycemic and vitamin-A- rich spaghetti squash. You’ll find Thai fish sauce in your local Asian or natural food market, or in the international aisle of most large supermarkets. 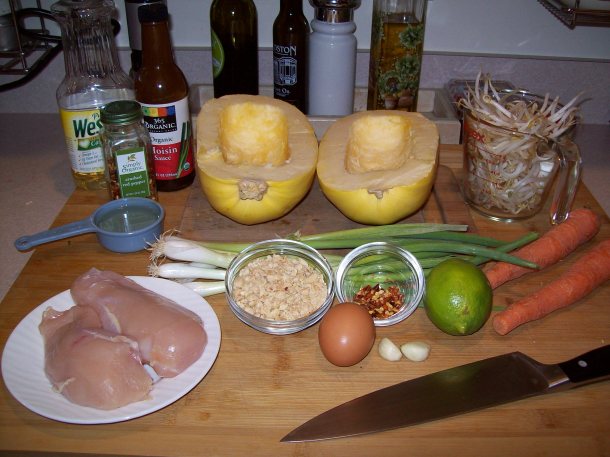 1/4 Cup peanut oil – I substituted with Canola oil normally I would have used peanut but my cupboards were bare.

1 Tablespoon thai fish sauce .  I can’t get past the smell of fish sauce so I used Hoisin sauce instead.

4 Ounces raw shrimp peeled, deveined, and roughly chopped – did not have the shrimp so doubled up on chicken

1/4 Cup roasted peanuts chopped, for garnish – I also added the zest of  one lime to the peanuts 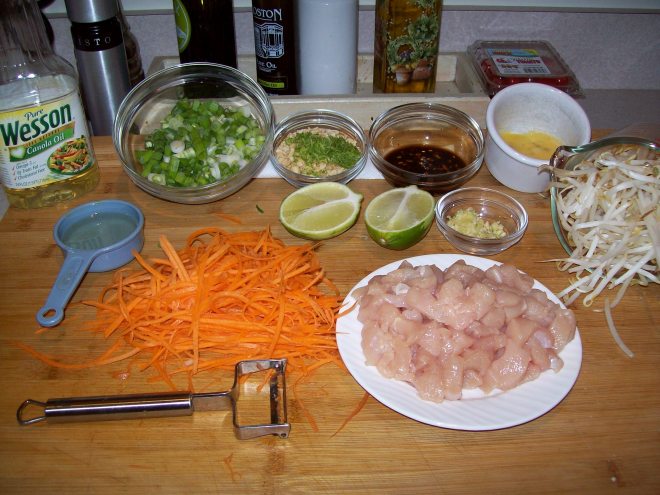 Brush the cut sides of the squash with 1 tablespoon of the peanut oil. Place the squash, cut sides down, on a baking sheet and roast for 30–40 minutes. The squash is cooked when a knife easily pierces through the skin and flesh. Let cool, use a fork to shred the flesh into spaghetti-like strands, and set aside.

In a small bowl stir together the fish or hoisin sauce, tamari, and red pepper flakes. Set aside.

Heat 1 tablespoon of the oil in a large wok or large cast-iron pan over medium-high heat. Add the egg and cook until scrambled, 30–60 seconds, breaking it up. Transfer to a plate and reserve

Toss in the carrots and stir-fry them for 1 minute. Transfer the contents of the pan to a platter.

Add the remaining 1 tablespoon oil to the wok, spread the squash strands out in the pan, and cook for 1 minute without stirring. Flip the pile of strands over and brown them for 2 minutes on the other side.

Pour the sauce into the wok and add the chicken-shrimp mixture, egg, bean sprouts, and scallions. Gently toss to heat through, and squeeze the juice of one lime half over all. Garnish with the peanuts and serve with the other half lime available for table-side squeezing. Any leftovers can be refrigerated for up to 4 days.

The spaghetti squash (Cucurbita pepo) (also called vegetable spaghetti, noodle squash, spaghetti marrow, and squaghetti) is an oblong seed-bearing variety of winter squash. The fruit can range either from ivory to yellow or orange in color. The orange varieties have a higher carotene content. Its center contains many large seeds. Its flesh is bright yellow or orange. When raw, the flesh is solid and similar to other raw squash; when cooked, the flesh falls away from the fruit in ribbons or strands like spaghetti.

Spaghetti squash contains many nutrients, including folic acid, potassium, vitamin A, and beta carotene. It is low in calories, averaging 42 calories per 1-cup (155 grams) serving.[2]